George Osborne made a centrepiece of it in his Autumn Statement speech in Parliament 10 days ago. He wanted to conjure up the image of rewarding hard-working ‘strivers’ getting up early to go to work every day while hitting work-shy ‘scroungers’ who lie in bed all morning with the curtains closed. He was widely derided for it this at the time, particularly when it was pointed out that 60% of the people losing out from the real term cuts to working-age benefits were actually people in work.

I was somewhat surprised therefore (perhaps naively)  to learn that Tory Party Chaiman Michael Green (AKA Grant Shapps) found Osborne’s attack so inspiring, he’s decided to make it a central plank of his election strategy for fighting marginal seats. They are putting out these targeted banner ads: 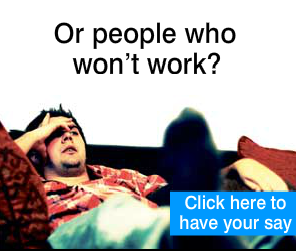 The strategy is pretty straightforward then. Classic divide and rule, pitting those who are working against those who – in the vast majority of cases – are not working through no fault of their own. The Government have had some success in this strategy to date, over public sector pensions and the £26k benefit cap, but judging by the comments BTL here, people don’t seem to be buying this latest attack so far.

Shapps has coincided this campaign with a call for people to ‘have their say’ about the Government’s welfare policy, by launching an online petition. Judging by the wording of the questions, this doesn’t seem to be an honest attempt at gathering people’s view, rather an attempt to affirm his party’s long-held prejudices. Despite this, I would urge everyone to complete it, to let Shapps know exactly what you think of him and his shameful campaign.