Two significant events this week – the start of long-awaited cuts to certain benefits, and the conviction and sentencing of Mick Philpott – has led to the outbreak of a war of words over the rights and wrongs of our welfare system.

Grant Shapps and Iain Duncan Smith kicked things off last weekend, with Shapps pointing at some Government figures and then lying about what they told us about welfare and IDS telling Jon Humphrys he could live on £53 a week. This led to the heart-warming sight of a petition set up to challenge IDS to prove it garnering almost 450,000 signatures in less than a week. There were also stories about some of IDS expense claims, like £39 for one breakfast and £110 for a bluetooth headset added to the ridicule.

Then came Mick Philpott and the Daily Mail’s nasty front page on Wednesday: 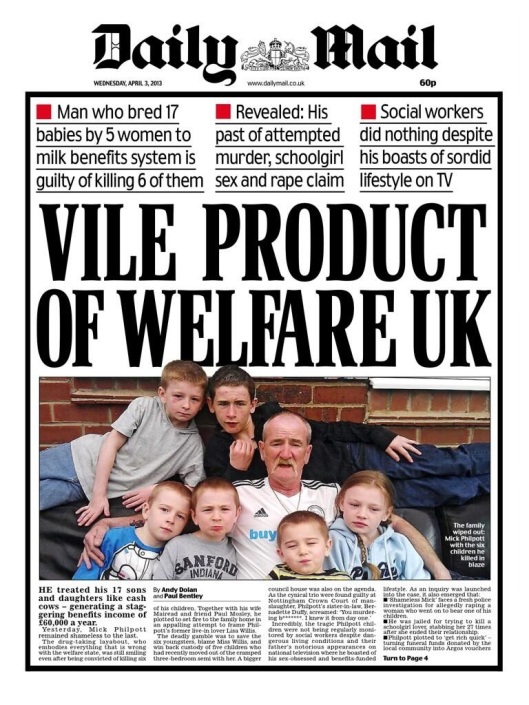 There was also this fairly objectionable and fact-free piece in the Telegraph by Allison Pearson. At first, the linking of Philpott’s crimes to the welfare system were confined to the right-wing press but then George Osborne decided to give everyone the benefit of his wisdom on the matter saying:

In response to this assault on the welfare state, many on the left pushed back admirably, providing detailed and fact-laden rebuttals to some of the propaganda being put out by the media and the politicians. Owen Jones in particular repeatedly called out those on the right who sought to score political points from the Philpott tragedy:

Bloggers also played an important role in getting some facts about welfare out there. In particular this post and this one struck me as being important contributions.

So I would say those of us defending the welfare state definitely have the facts on our side, but this brings me to the question posed in the title above – Who’s actually winning the welfare war?

People on the left like John Harris have been cautioning for a while that polling shows people in favour of more cuts to welfare, and George Osborne certainly thinks he is on the right side of the argument. At the same time, there are also voices from the right urging caution over appearing to be “foaming-at-the-mouth” over welfare. Owen Jones on the other hand sounds more optimistic, tweeting:

Until last week, I doubted we could win the poisoned welfare state debate. Changed my mind. With courage, honesty and determination we can

At the moment I’m somewhat less pessimistic about where this will go. The reason is amply illustrated in this video clip from one of Stewart Lee’s standup shows:

The truth is, an awful lot of people seem to be impervious to facts or reasoned argument. Here’s another (mindboggling) example. Look how Richard Dawkins patiently explains the evidence for evolution, while the creationist lady just keeps repeating “where is the evidence” (I like to imagine Dawkins just going into a room on his own and screaming after these type of interviews 🙂 ).

Bringing it back to this week’s welfare debate then, after tweeting a link to Johnny Void’s excellent post explaining in detail how it would be very difficult to make a profit from benefits by having more children, someone replied to my tweet to say:

@alittleecon @johnnyvoid I got told I was a "liberal twat" for sharing this "liberal bullshit". LOL

The Daily Mail also ran a poll on Thursday asking whether people thought benefits contributed to Philpott’s crimes. Around 70% agreed. Now often, when the Mail runs hateful articles, the comments underneath show people in disagreement with the article’s content, but under this one, the three most popular comments were:

“It was not the benefits that killed the children but sure as hell he was the master of abusing the benefit system and he is the prime example why we need the benefit changes introduced and more to come hopefully.”

“Sound right to me. Why should I pay for the lifestyle choices of others? My wife an I stopped at 2 children because we could not afford more!. How many more are there claiming large amounts of money pushing out kids year after year?”

“This is what happens when there is benefits system that makes it pay to breed, the more kids the merrier. Limit all benefits payments to two children only NOW!”

Now to me, these comments (particularly the third one) are batshit crazy, but it seems to be what a lot of people actually think, hell, a lot of people I know personally think like that. I don’t think people are impervious to facts, just that it takes no time at all to repeat a lazy stereotype about welfare, but much longer to rebut it. It seems to be much easier to spread fear and resentment with a few lies and some unrepresentative extreme case than it is to persuade through coherent argument and facts and figures.

I think those who defend welfare (and public services in general) need to come up with some better strategies for dealing with misinformation of this kind, because there is undoubtedly a lot more of it on the way. Owen Jones is doing a good job, as are a number of Guardian columnists and notably some relentless disability campaigners who are trying to fight back, but the Labour Party don’t seem know which way to face at present. I’d be interested to hear if people agree with me, or are more optimistic. We all need a bit of hope!