I just came across this piece from Private Eye, and it explains pretty well one reason why we shouldn’t be bombing Syria. It’s also the reason why I am against it. This may be a different reason to the reason Jeremy Corbyn was opposed, but I think it’s as good as any. It’s not as simple as the emotional proponents like Hilary Benn had us believe. 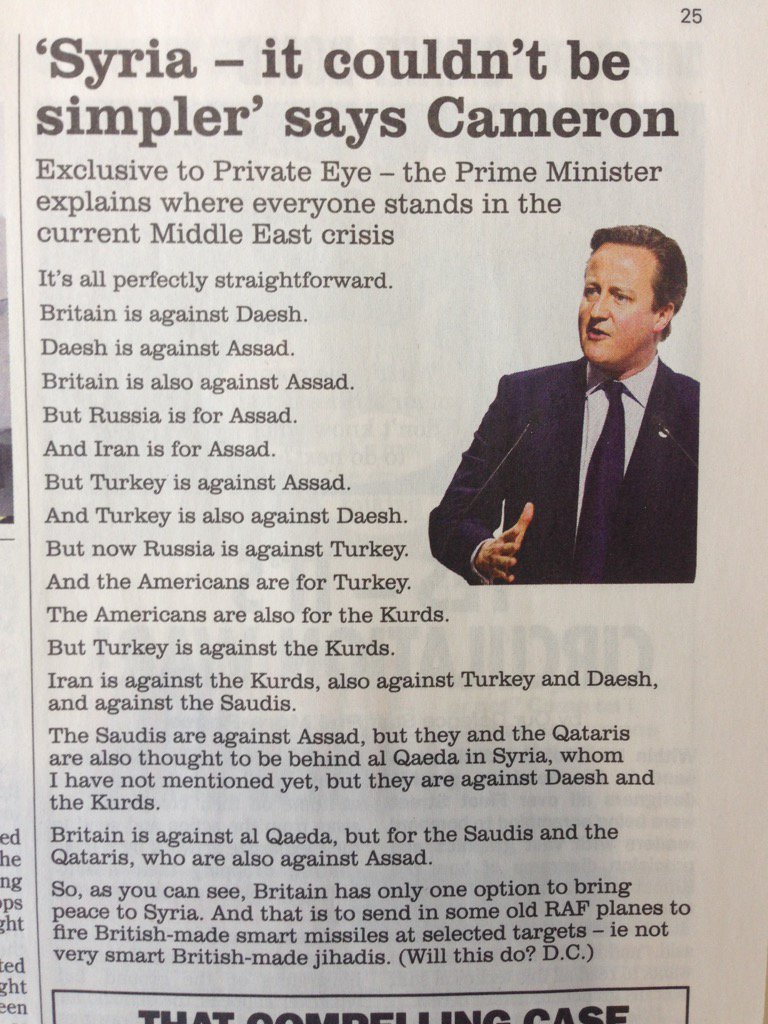 Labour MPs seem to be spending a lot of time talking about deselections at the moment. We are being told that Labour MPs who voted to bomb Syria will be ‘targeted’ for deselection by ‘entryists’ and the Corbyn leadership campaign spin-off group with a ‘The Apprentice’ team name – Momentum. Names that have been mentioned in connection with deselection include Chuka Umunna and Stella Creasy. But is there any substance behind these stories?

On Channel 4 News last night, Michael Crick thought he had uncovered a plot in Stella Creasy’s Walthamstow constituency. He had found a leaflet that had been distributed in the constituency inviting people to attend a meeting to discuss the deselection issue. Crick did what he is known for and turned up at the meeting, where he discovered a grand total of 12 people, 8 of the school kids. Here is the vid:

For all the noise around deselections, the truth is, the only evidence of people campaigning for them are a miniscule number of people outside the Labour Party who have no power to deselect anyone.

It would seem to me fairly clear that some Labour MPs dislike groups like Momentum because it will place more scrutiny on what they are doing. They particularly don’t like to be reminded that the decisions they make have real life consequences that they will bear some responsibility for.

Until the boundary review is concluded in 3 years time, no deselections can take place anyway. The noise around Momentum is simply a continuation of the strategy used during the Labour leadership campaign. Guilt by association and the smearing of – on the whole I would guess – young people newly enthused by politics for the first time who want to find a way to organise and help Labour win the next election. Labour MPs should be embracing these new members rather than viewing them with suspicion.